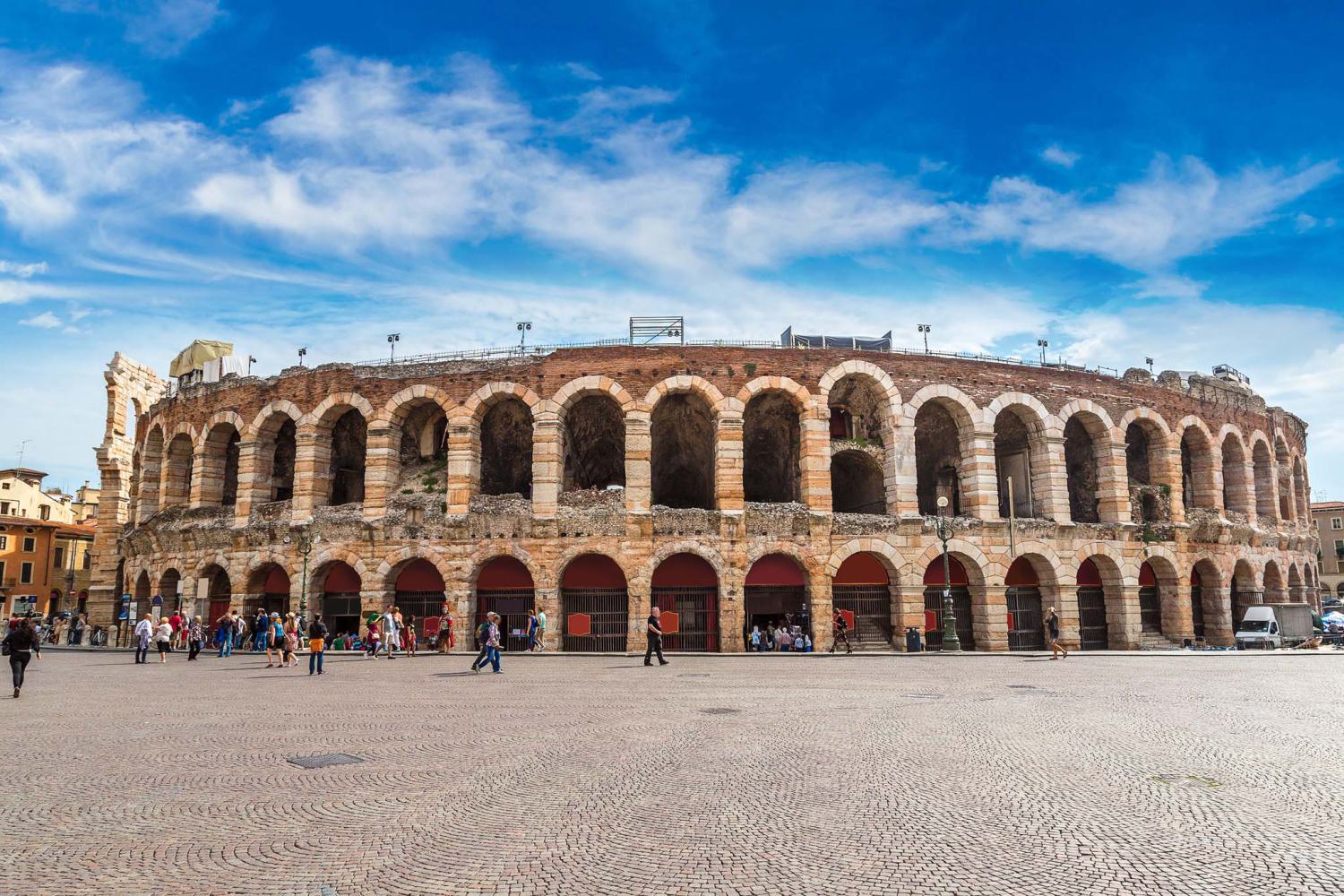 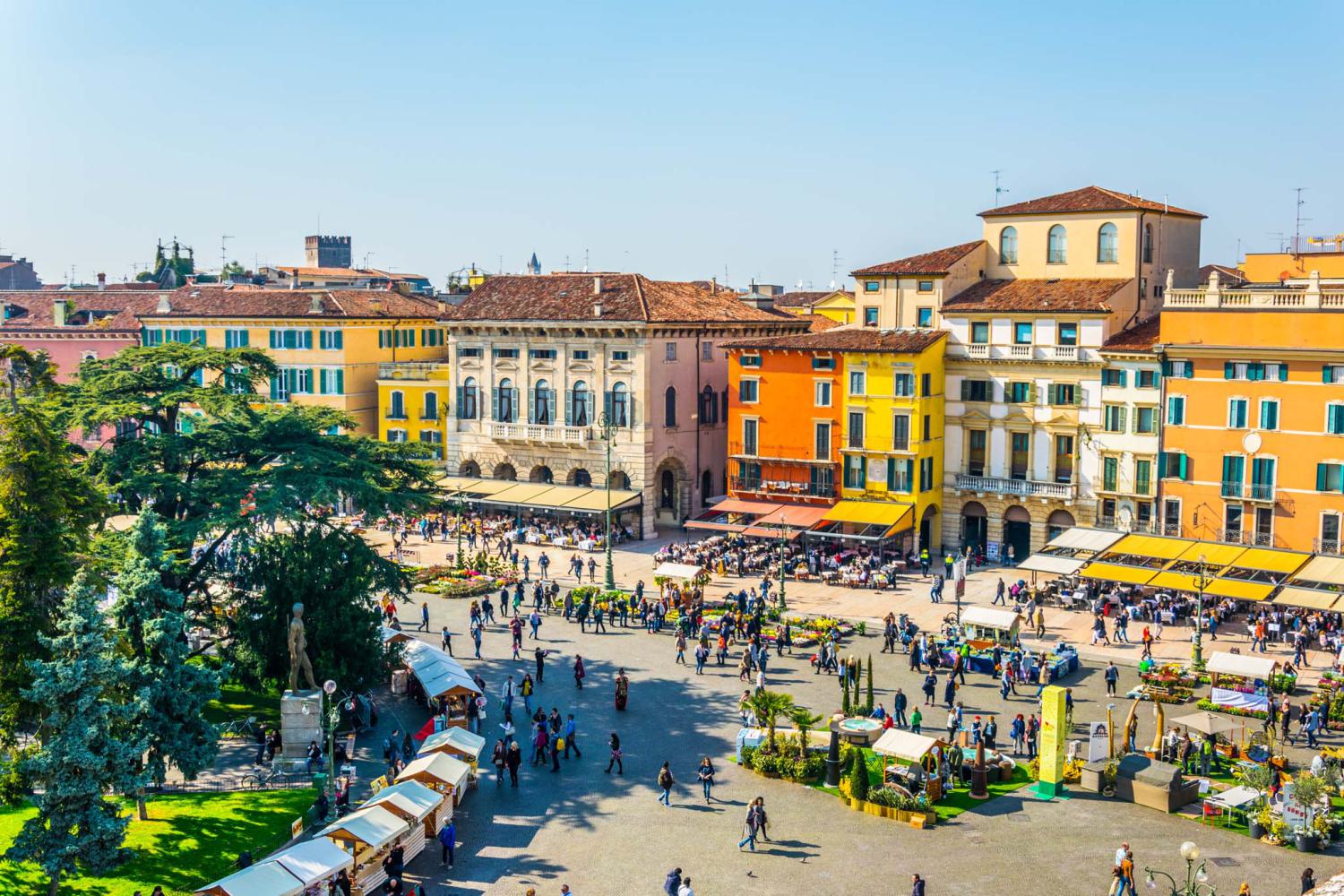 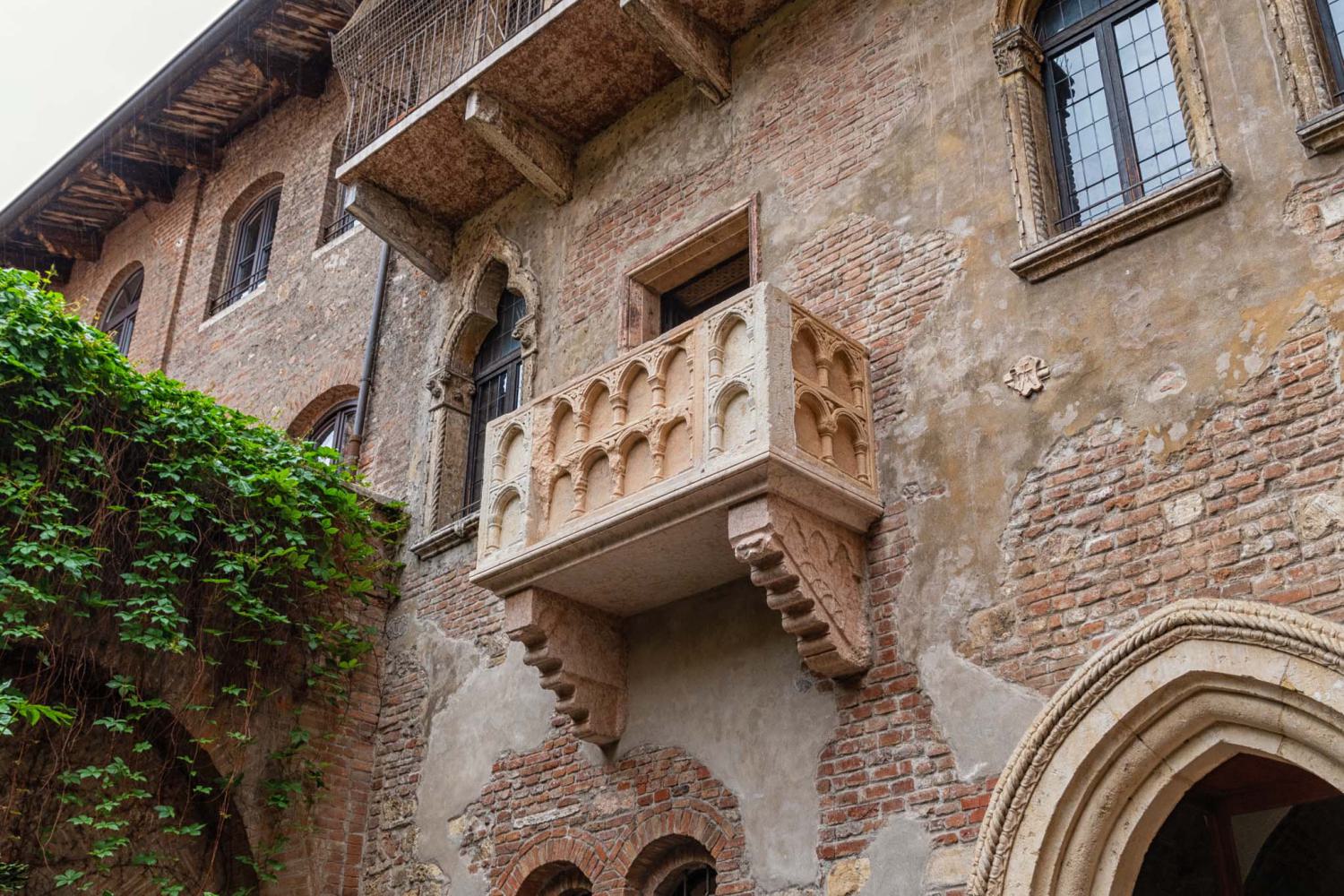 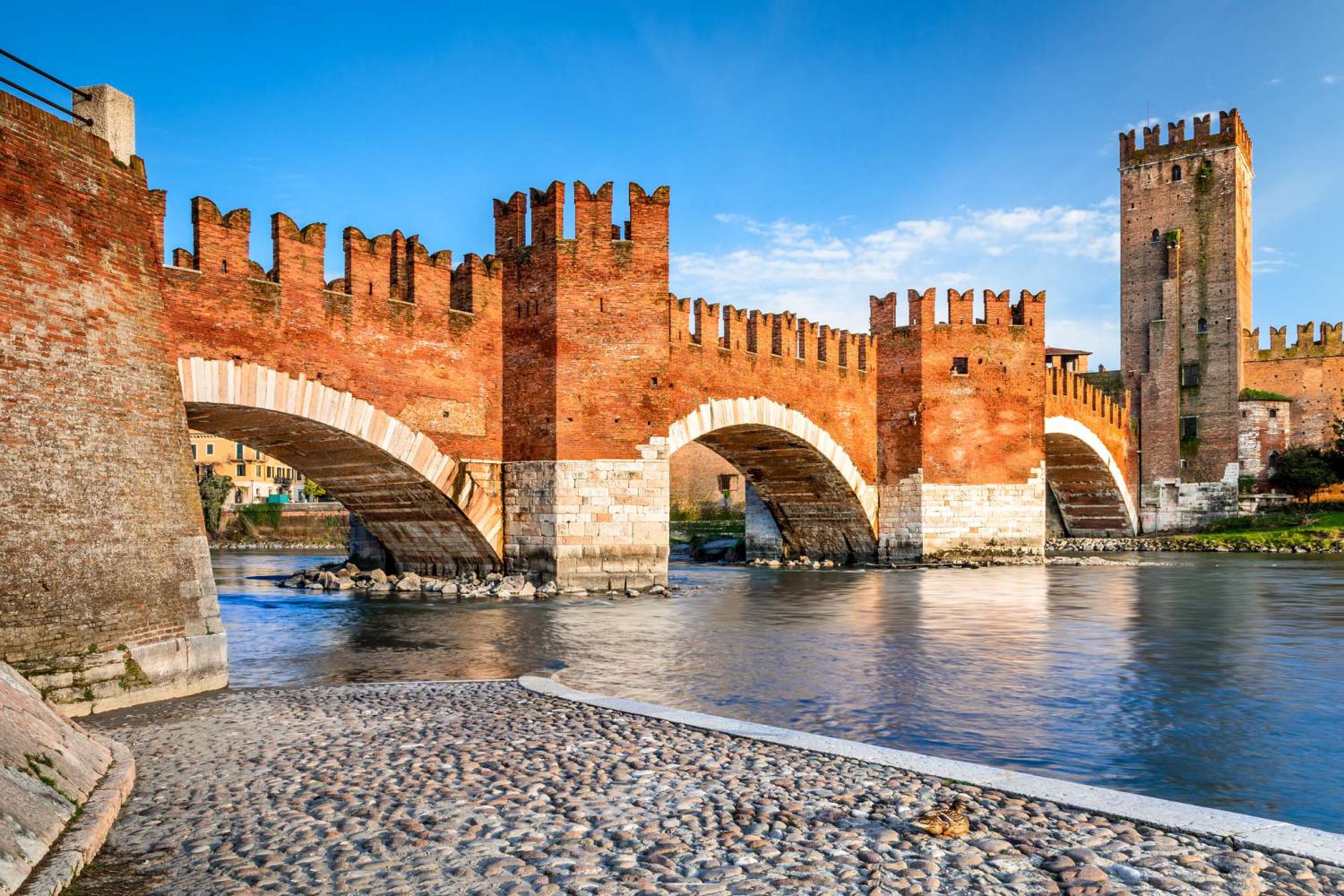 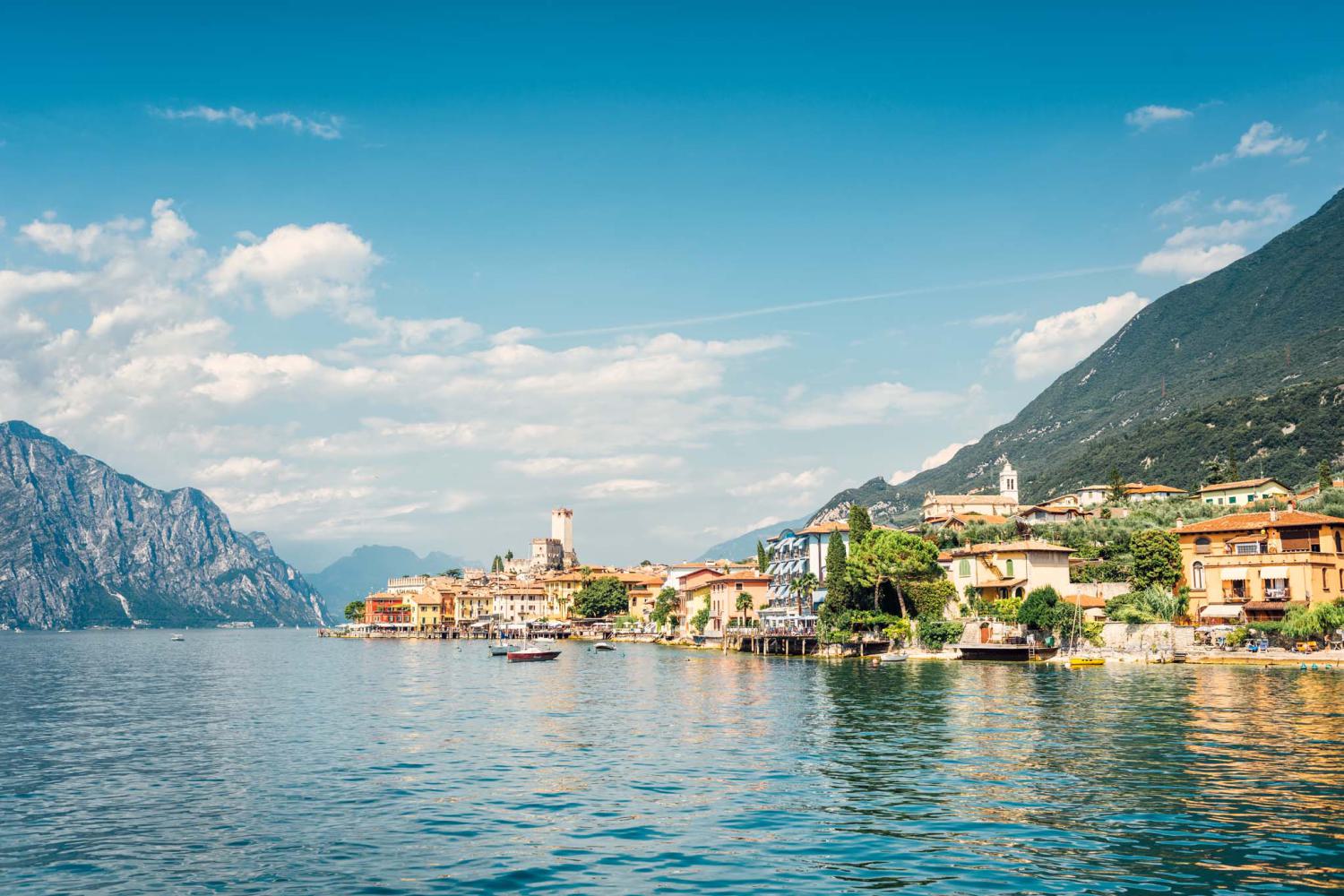 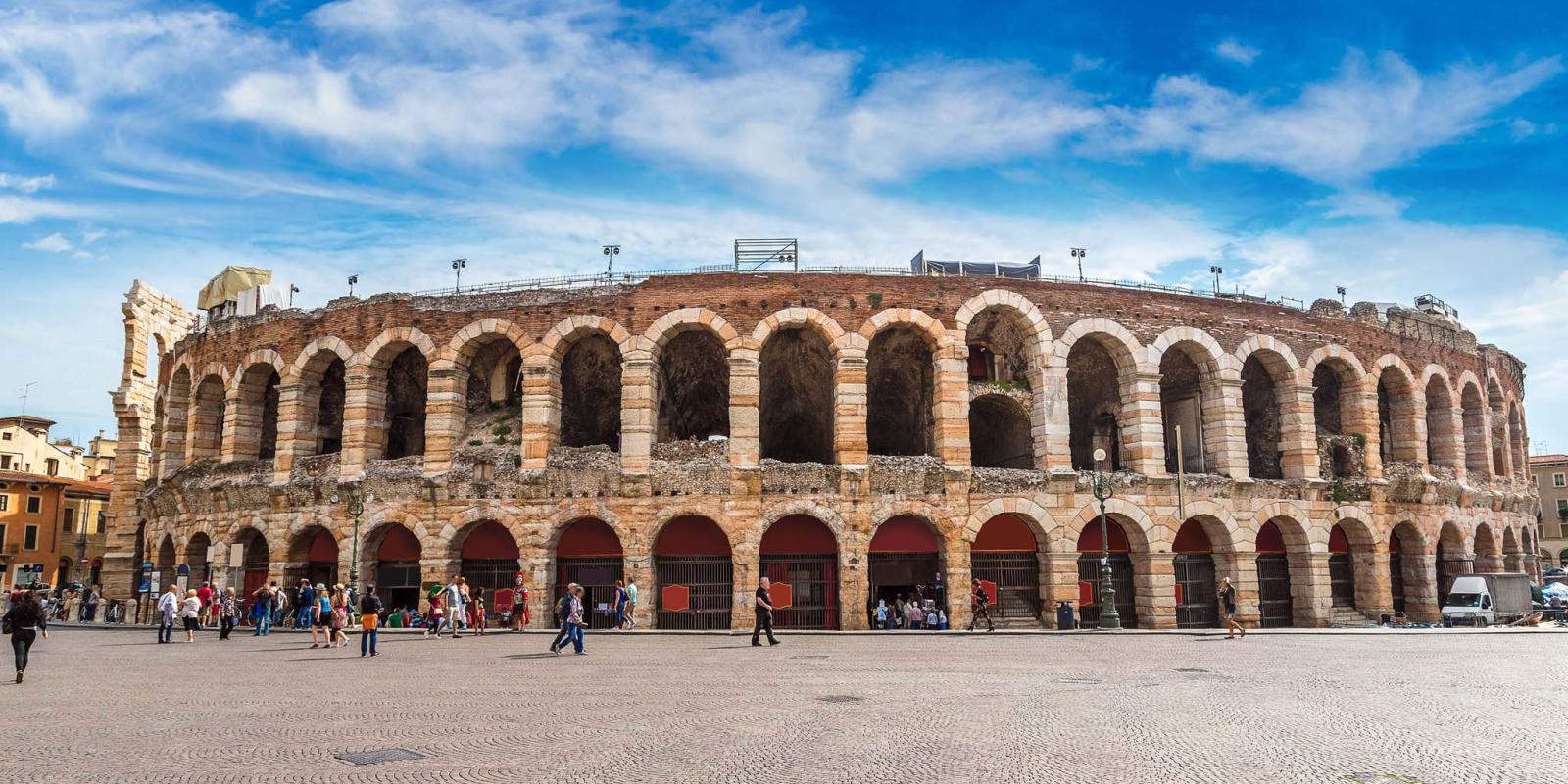 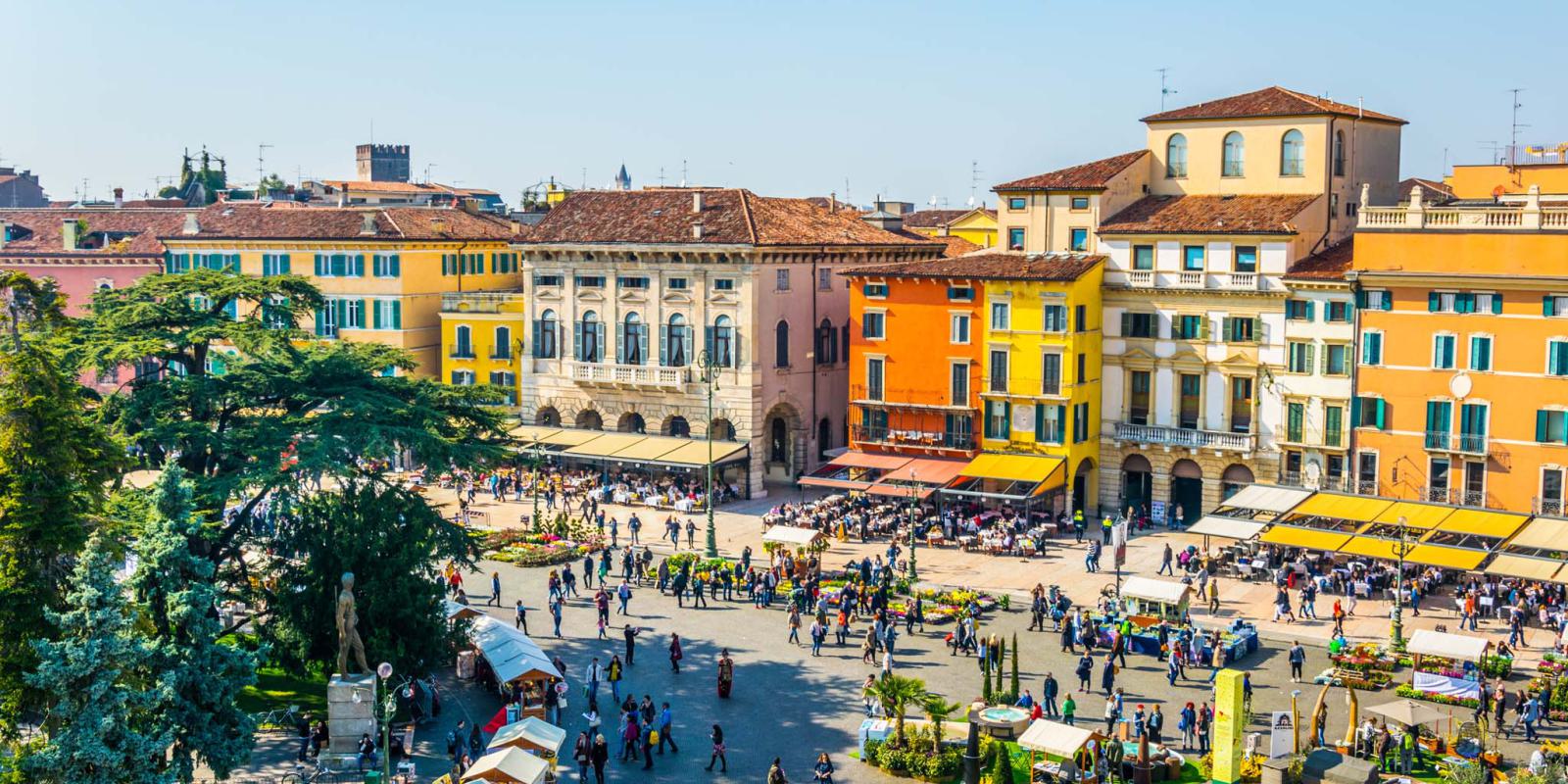 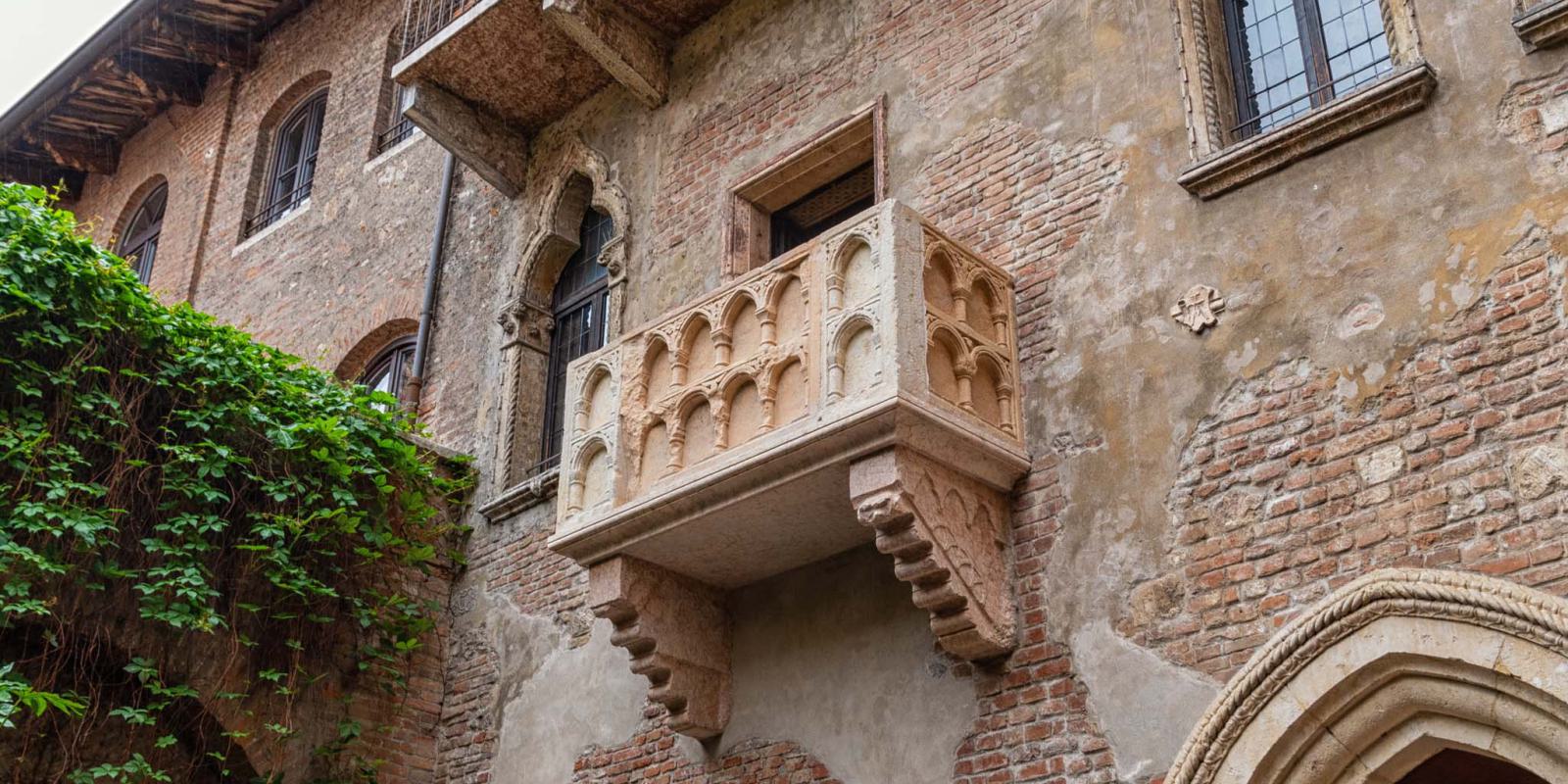 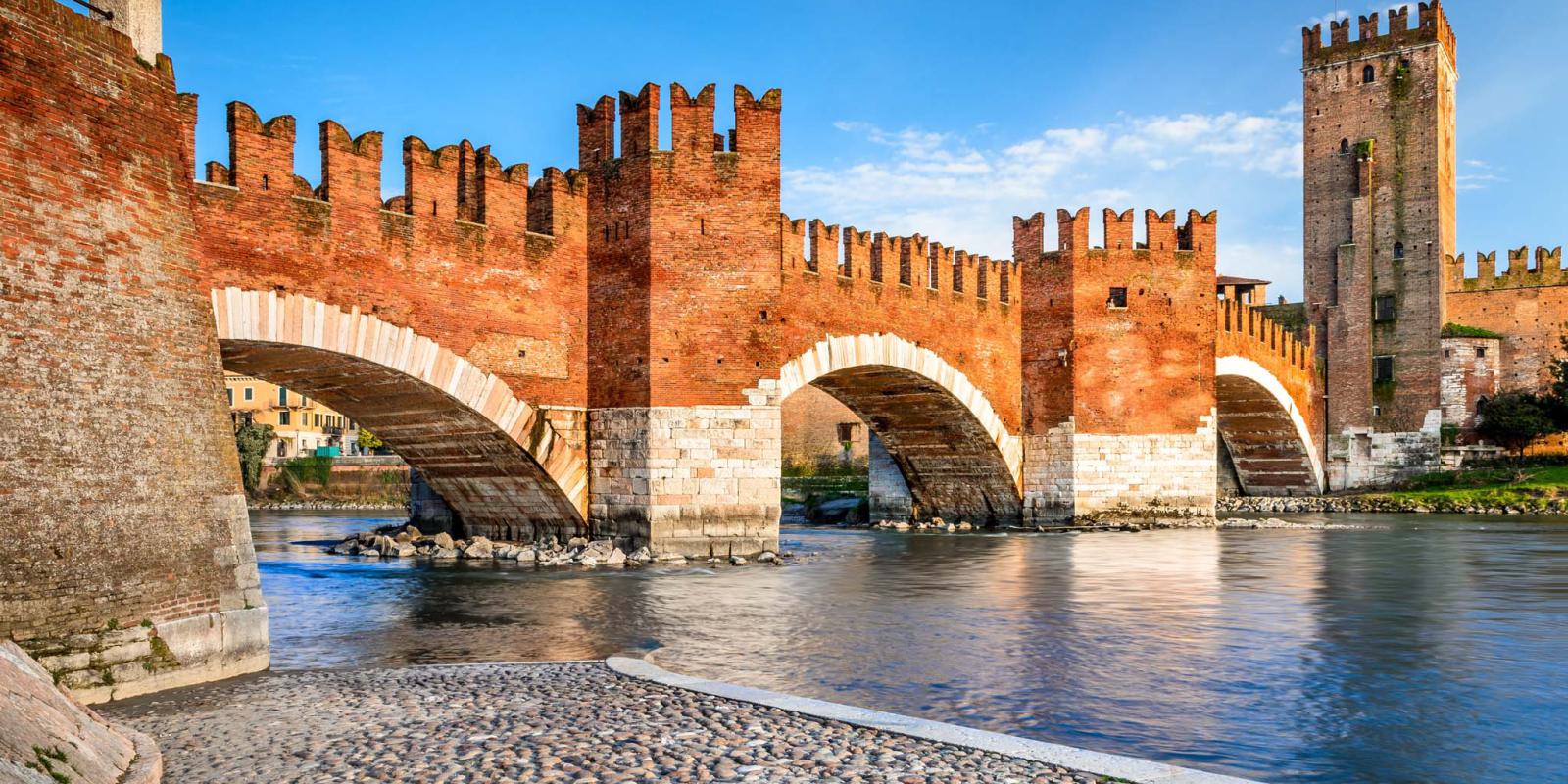 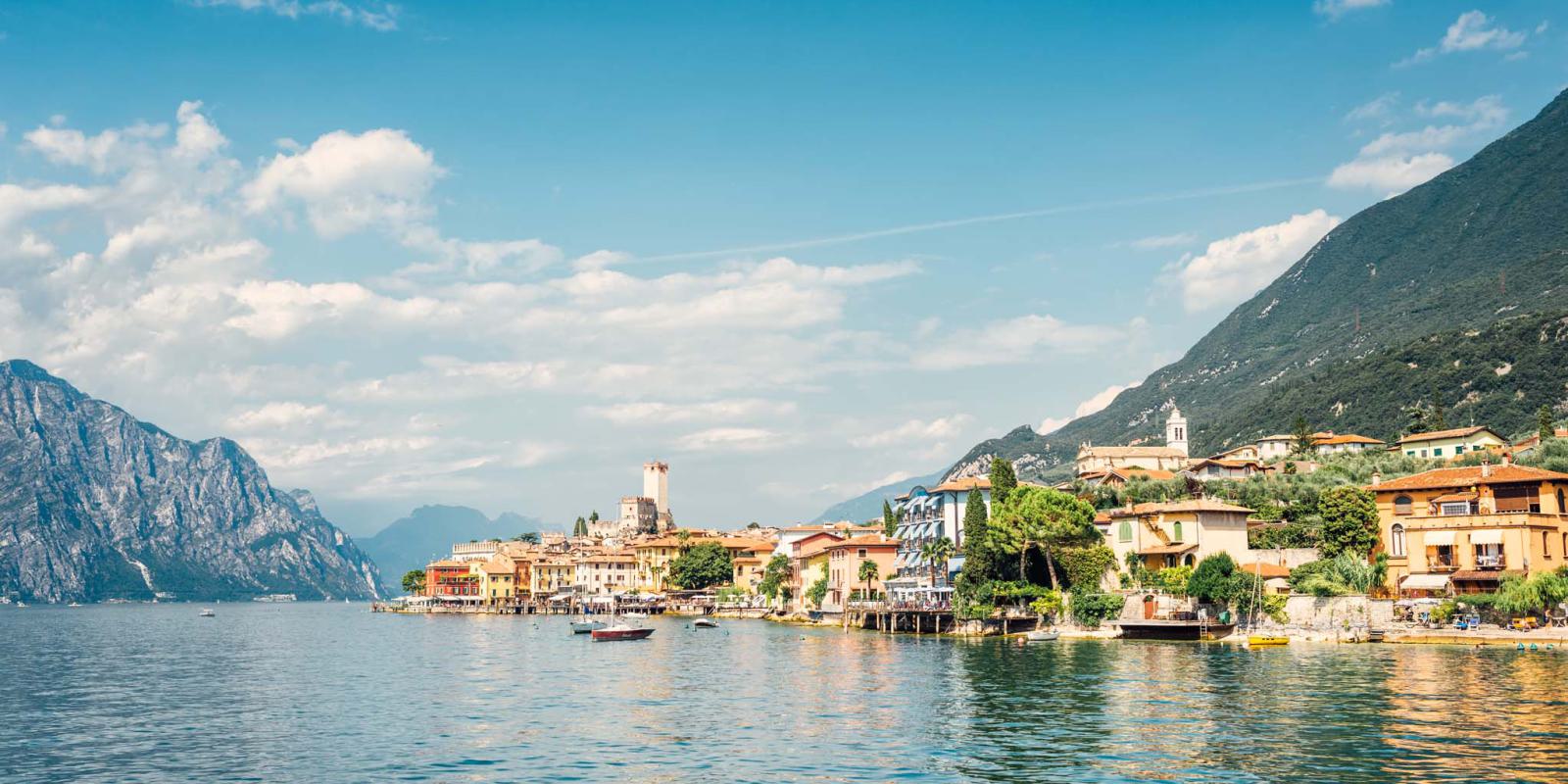 Verona, known as the "city of lovers" thanks to Shakespeare's "Romeo and Juliet" tragedy, is one of the oldest and most characteristic Italian towns.What are Verona's highlights? Among the main points of interest, which draw flocks of tourists every day, we should highlight:1. Juliet's House2. The Scaliger Bridge3. The renowned Arena di Verona

But where is it exactly? Verona is one of the major cities in the Veneto region, second only to Venice, from which it is about an hour and a half drive away. Close to the stunning Lake Garda, the largest in Italy, it is the ideal destination for a romantic weekend and for culture and entertainment lovers.

The city of Verona is a magnificent example of historical and artistic stratification, thanks to the testimonies of different eras still visible today in the main squares, on the bridges crossing the Adige River and in the historical centre of Roman origin, today's part of Unesco World Heritage.

If you're wondering what to see in Verona, we recommend starting at Piazza Bra, the massive square in the heart of the citadel where the majestic Arena rises. Here, you will not only discover some of the most important monuments of the city, such as Palazzo Barbieri and the seventeenth-century palace called the Gran Guardia, but you can also sit in one of the many bars to enjoy a good coffee and breathe Verona's air.

As you pass through Via Mazzini, the shopping street with the most eye-catching shop windows, you will come upon another lively and prestigious piazza: Piazza delle Erbe, a real architectural jewel. Founded as a Roman forum, it is the oldest square in the city, surrounded by palaces of every style: the baroque Palazzo Maffei, the colourful Mazzanti houses frescoed on the outside, and the elegant Torre dei Lamberti, which offers a unique panoramic view.

Another worthwhile highlight, even if hidden among the alleys and palaces of Verona, is the Cathedral, yet another historical witness adorned with numerous styles, from Romanesque to Gothic and Renaissance. The Cathedral of Verona is certainly the most beautiful church in the whole city, with a deep and majestic nave and examples of outstanding craft wherever you look: the Altarpiece of the Assumption, for example, was one of Titian's creations!

The moment to visit the greatest Veronese attraction has arrived: Juliet's house, where the tragic affair was consummated with her beloved Romeo, as told by Shakespeare. From Piazza delle Erbe, a lovely alley will take you to the famous balcony, from which, as legend would have it, the girl witnessed with dreamy eyes Romeo's declaration of love.

Influenced by the dramatic story, couples from all over the world leave a sign of their feelings through a love letter or by hanging a lock with their initials, as a symbol of eternal union.

To reach Juliet's tomb, just walk for 15 minutes on a pleasant riverside path, up to the former convent of San Francesco al Corso, where the sad story came to an end with the suicide of both lovers.

And how about Romeo's house? Just three minutes away from Juliet's house, there is the imposing medieval manor of the Montecchi family, to which the young man in love belonged.

The city symbol par excellence is certainly the Arena di Verona, the Roman amphitheatre best known after the Colosseum and the third in the rankings by size.

If that were not enough, it is also the best preserved Roman amphitheatre in the world! In fact, it is still possible to admire its peculiar elliptical shape, 110 meters wide and 140 meters long, upheld by 72 double stone arches!

If the well-known theatre with pink hues hosted first the Roman courts and then the fierce gladiator battles, today the Arena is home to great shows and international concerts. It is here, in fact, that since 1913 the famous Arenian Opera Festival is held, one of the most prestigious in the world.

What is the most represented opera? Certainly Aida, offered anew every season. Followed by Carmen, Nabucco and Turandot.

A major attraction for the whole of Europe, the large open-air stage also featured well-known pop artists, from Baglioni and Gianna Nannini to Frank Sinatra and Elton John.

Ticket prices vary by show but above all depend on the type and location (from Poltronissima Gold to the Gradinata), from affordable seats to rather exclusive ones. Visit the official Arena website to check seat availability and cost.

After the Arena and Juliet's House, it's time to enjoy the view and the romantic charm of the city. Head towards the river and try to spot the red brick bridge, typical of the Middle Ages: the Scaliger Bridge.

Built as an escape from the city, it is 120 meters long and is connected to the Castelvecchio, an ancient defence site against military attacks. Its purpose appears evident from its fortification, which complements the Castle's architectural system.

The bridge, one of the most beautiful and photogenic, crosses the Adige River, the second Italian river by length after the Po River. In fact, this river runs 400 kilometres from Austria to the Adriatic Sea.

From the walk along the crenelated bridge, you cannot miss a characteristic souvenir shot, especially at sunset!

Among the museums in Verona, in the Castelvecchio area, there is the Civic Museum, inside the ancient fortress, with about 30 halls dedicated to Italian and European art. Walk around and explore the world of sculpture, painting and archaeological finds.

History buffs will loose themselves in the Archaeological Museum. Adjacent to the ancient Roman theatre located across the river, the Museum offers evidence of that period and also of Etruscan times, including vases, sculptures and tools found in the necropolis.

For opera lovers and those who are falling in love, we recommend a visit to the AMO, the Arena Opera Museum, to immerse yourself completely in lyrical music through photography, scores and scenography.

Verona and its surroundings

Things to see around Verona?

Let's start at Vicenza. Less than an hour's drive away, and even closer by train, you will arrive in this spectacular Venetian city, the triumph of the Renaissance: Vicenza, the city of Palladio.

For a "tasty" outing, head to Soave, a small town in the province of Verona, known especially for its homonymous wines.

Yet another fascinating destination that is fairly close to Verona is Lake Garda; enjoy a scenic walk along the lake or visit one of the picturesque towns overlooking the lake.

Eating and drinking in Verona

After a long day of touring monuments and museums, it's aperitif time!

Before enjoying a typical Veronese dinner with tortellini di Valeggio, pasta and beans or bigoli with sardines, stop at one of the lively squares of the centre for a "spritz" (typical Venetian aperitif) break.

In the busy Piazza delle Erbe, you will find many spots, wine bars and an area of party and relaxation.

Where can we eat in Verona? Here are a few tips:
1. Il Desco, sophisticated, with 2 Michelin stars
2. The Maffei Restaurant, in the central Piazza delle Erbe
3. The Al Duca tavern, for traditional dishes and atmosphere

Verona is easily reachable with the main means of transport: car, train and plane.

From the A4 motorway, you can get close to the city and park your car in one of the paid parking lots adjacent to the historic centre, closed to traffic outside of certain time slots.

If, however, you fly into Verona, the Valerio Catullo airport is just 12 kilometres away and is connected to the city by the ring road, which you can comfortably travel by shuttle bus.

Finally, the "Porta Nuova" train station is just a 20-minute walk from the Arena.

Now it's time to pack and get ready for the trip. Happy holidays! 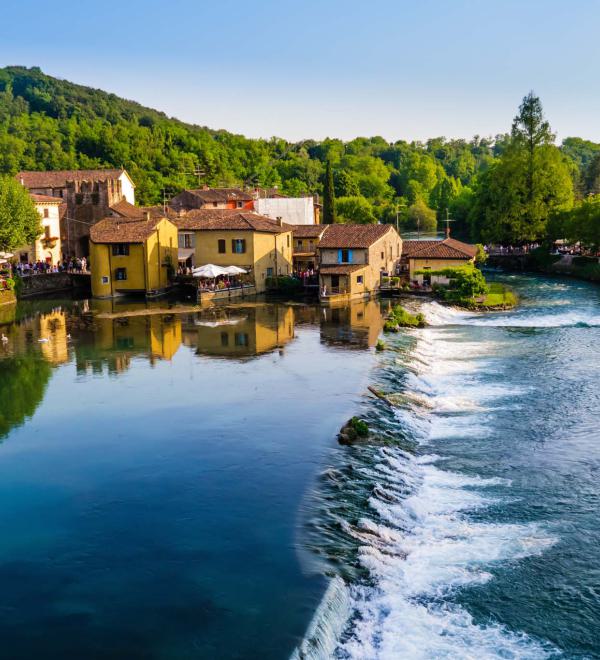 Along the river Mincio, the 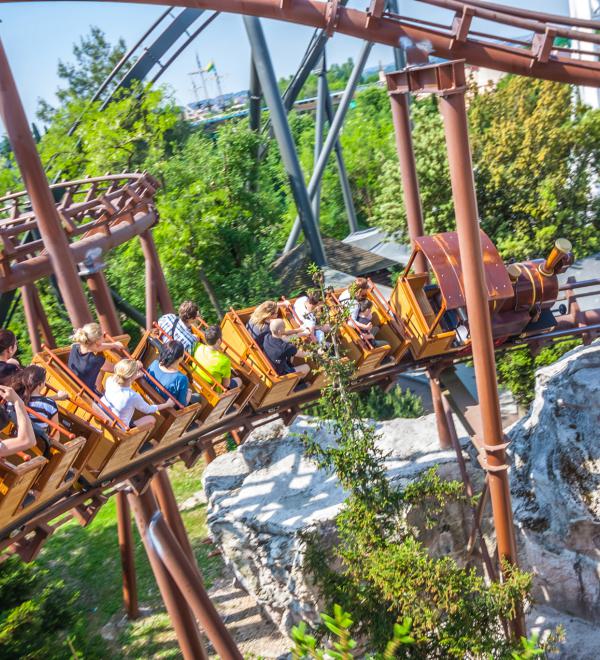